Fastest Jet Ski and PWC Options by Brand - PowerUp
(850)-461-1034 [email protected]
You must arrive 1 hour early to take a boater's safety test if you were born after 1/1/1988 and please arrive 30 minutes early for all reservations. 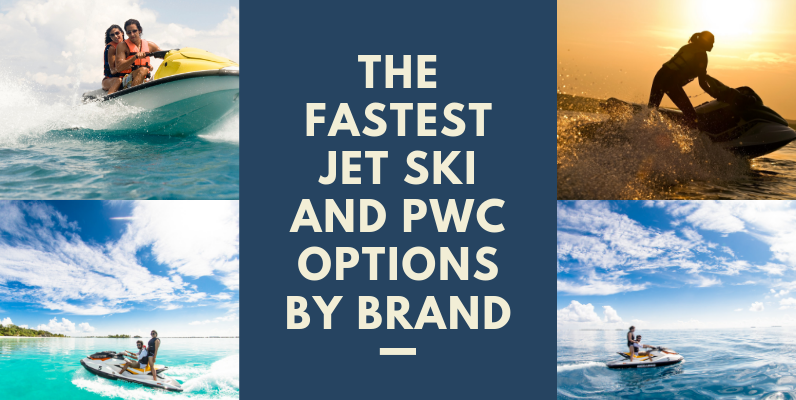 If you’re in the mood for a jet ski experience, the question has undoubtedly crossed your mind: what is the fastest jet ski? And what brand makes it?

Well, if you have asked that question, you’re in for a treat. Here’s a rundown of the fastest jet ski and PWC (powered watercraft) options by brand.

Yamaha offers a range of high-performance jet skis but the VXR, as you might be able to guess from the name, is the cream of the crop. The 739-pound monster is capable of achieving speeds in excess of 67 mph on open water and is big enough for three people at a time.

The VXR is one of Yamaha’s latest models, released in 2019, and comes with a brake (fortunately), reverse options, and some storage for your gear.

Kawasaki doesn’t say how fast the Ultra 310X will go, but you can bet that it’s probably quite a bit faster than the stated 67 mph on the tech sheet, which is already impressive enough by itself. The Ultra 310X is a little larger than the monster VXR and weighs in at a mammoth 1052 pounds. The new 2019 model features reverse but, no brakes (this is typical for PWCs), and will accommodate up to three people.

As you might guess from the name, the Kawasaki Ultra 310X comes with a full 310 supercharged horsepower – more than most cars. This jet ski is a real monster, and only for the most confident of ski masters on the water. Be sure you have plenty of room to run before opening this baby up!

Kawasaki has designed the Ultra 310X with water dynamics in mind. This PWC, like the others in this list, is specially designed to achieve stability in the water at high speed, giving you the confidence to go faster than you probably should.

The Sea-Doo GTR-X 230 looks like a real racing thoroughbred. Everything about it screams speed and agility. It is one of the most powerful jet skis on the market.

The official specs show that the Sea-Doo GTR-X 230 comes in at slightly slower on the official specs, with a quoted top speed of 65+ mph. But given the addition of the “+,” it’s hard to know how fast the thing will go when you’re out on open water. You just don’t know ahead of time.

The GTR-X 230, as you might guess from the name, comes with 230 HP, or about 80 HP fewer than the Kawasaki Ultra 310X. The engine is less powerful than its rival, but it also weighs about 20 percent less, leaving it ambiguous which of the two is the fastest.

The Sea-Doo uses an innovative water-dynamic design which helps to scoop water to the side of the craft and allow the GTR-X to bounce along the top.

If you’re ever in the Fort Walton Beach area and want to rent some of the fastest jet skis and PWCs in the FWB area, then pay us a visit at PowerUpWatersports. We’d love to get you and your friends/family in a fast jet ski and out on the open water ASAP.